Beneficiaries of the N-Power initiative who have concluded the two-year job programme will now be able to access permanent job opportunities or business prospects in line with the N-power exit strategy now activated by the Muhammadu Buhari administration.

Under the plan, 200,000 beneficiaries will be engaged as financial services operators under a Shared Agent Network Expansion Facility (SANEF) scheme operated by the Central Bank of Nigeria.

Another 30,000 have already been engaged as geospatial experts and enumerators in the Economic Sustainability Plan’s Mass Agric programme while several others will have the option of benefiting from the GEEP micro-enterprise loans.

Some beneficiaries of the scheme confirmed in separate telephone interviews that a platform known as N-exit portal had indeed been opened to collate and process beneficiaries’ information in line with the government’s exit strategy.

Mr Orioye Gbayisemore, a beneficiary from Ondo State, confirmed that many of his colleagues in his community had already uploaded their data on the N-exit portal while Mrs Vivian Nkiruka Nellys, another beneficiary in the FCT, said she uploaded her data at the end of December 2020 in preparation for the new scheme for the former N-Power beneficiaries.

The Minister of Humanitarian Affairs, Disaster Management and Social Development, Hajiya Sadiya Farouq, confirmed the activation of the Federal Government’s exit strategy for Batches A and B of the N-Power scheme at the 4th annual review of the Home Grown School Feeding Programme (NHGSFP).

”Plans have been concluded for the transition of the N-power Batch A and B through the creation of the NEXIT portal, which would allow those who choose to sign up to access other government empowerment opportunities.

”A beneficiary management system for the NSIPs is expected to be deployed in 2021 which would have the capacity to manage payments, address grievances and improve the dissemination of information,” he said.

In a similar vein, the Senior Special Assistant on Media and Publicity to the President, office of the Vice President, Mr Laolu Akande, said in a recent Lagos Classic FM Radio programme said that the Buhari administration will certainly not abandon the N-power beneficiaries.

He disclosed this over the weekend that the exit strategy to further engage the graduates had already commenced.

According to N-Power exit strategy document, at least 200,000 former N-Power beneficiaries will be onboarded on a scheme known as the Shared Agent Network Expansion Facility (SANEF) while at least 30, 000 others would be deployed for the Mass Agric programme, a component of the Economic Sustainability Plan (ESP), and another number will be given opportunities to improve or start new businesses under a micro-enterprise initiative.

The SANEF scheme is a project powered by the Central Bank of Nigeria, Deposit Money Banks, Nigeria Inter-Bank Settlement Systems, Chattered Institute of Bankers of Nigeria, Licensed Mobile Money Operators, and Shared Agents with the primary objective of accelerating financial inclusion in Nigeria.

According to the plan, the project will among other things create a platform for Nigerian owned financial services companies to grow whilst empowering and creating jobs for Nigerians. SANEF in partnership with NSIP will onboard 200,000 N-Power graduates as SANEF agents under the approved SANEF licensed Super Agents, while achieving N-Power’s objective to improve the livelihood of a critical mass of young unemployed Nigerians.

Under the scheme, the beneficiaries will be trained in different areas including customer service, transaction settlement, liquidity management, anti-money laundering, among others, while government would facilitate the initial funding for the scheme for each beneficiary.

The second exit strategy which is already being implemented is the deployment of former N-Agro beneficiaries for the Mass Agric programme as geospatial experts and enumerators. The goal is to engage the beneficiaries in the geo-mapping of farmlands and the enumeration of farmers, across the country for the programme.

The Mass Agric programme is a component of the Economic Sustainability Plan designed to among other things engage millions of farmers, cultivating thousands of hectares of land across the country.

According to the Senior Special Assistant to the President on Agriculture, Dr Andrew Kwasari, “over 30,000 former N-Agro beneficiaries have been enlisted and deployed to Local Government Areas across the country for the mapping of farmlands and enumeration of farmers under the Mass Agric programme.

”They are being supervised by the agricultural development officers in the Local Government Areas, he added.

The official noted that arrangements were ongoing for effective collaboration with state governments and other stakeholders to ensure that former N-Power beneficiaries maintain viable income streams in the new arrangements put in place by the Buhari administration.

Already, President Muhammadu Buhari has approved the expansion of the N-power beneficiaries from 500,000 to one million. 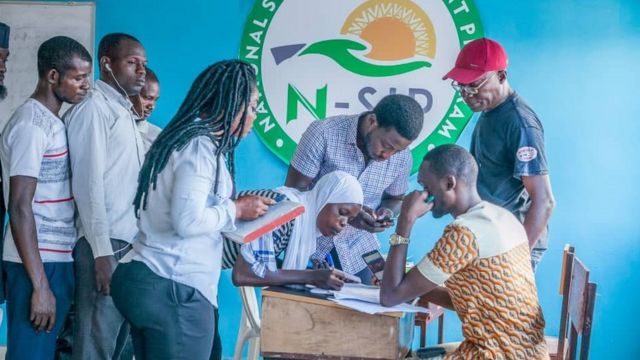