Applicants have been warned to be vigilant by the Nigeria Customs Service following the circulation of a purported list.

Nigeria Customs Service The Nigeria Customs Service (NCS) Wednesday dissociated itself from some lists of “successful applicants” from its recruitment exercise describing it as activities of fraudsters. Joseph Attah, National Public Relations Officer of the service, in a press statement made available to The Nation, described it as an “attempt to deceive and extort money from unsuspecting applicants,” warning that such recruitment websites are fake and should not be patronised by members of the public. Attah , a Deputy Comptroller of Customs, said in the statement: “the attention of the Nigeria Customs Service has again been drawn to the unrepentant activities of intrnet fraudsters despite several scam alerts by NCS.

“Recent activities of these elements show criminal ingenuity, presenting fake platforms that appears seemingly genuine to deceive and extort unsuspecting applicants that the Service has released short-listed names for recruitment examination/interview.“For the umpteenth time, NCS wishes to state that these recruitment websites/platforms are fake and should not be patronized.

“Members of the public will recall that we denied several similar fake vacancies advertisement with a promise to properly inform the public whenever we are ready. A promise we kept by advertising the vacancies in seven National newspapers.

“Accordingly, all applicants are advised to disregard any invitation for recruitment examination/interview and wait patiently for the official release and invitation from the Service, please,” he said. Well received, thanks. Received, thank you. Acknowledged.

In fact, if you did not apply for the Nigeria Customs Service recruitment, then you shouldn’t be reading this post. On contrary, you can apply for the… 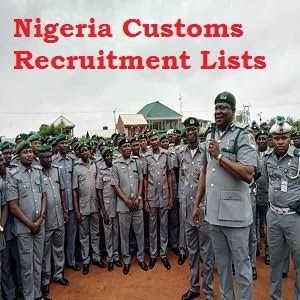