Minister for Humanitarian Affairs, Disaster Management and Social Development, Sadiya Farouq, has reacted to allegations that the federal goverment did not carry out any school feeding programme during the covid-19 lockdown.

Recall that the Human Rights Writers Association (HURIWA), had in a statement on Saturday, urged the minister to enter a public debate and explain to Nigerians how monies were spent on the programme, during the lockdown.

The minister in charge of that disastrous ministry of government must be made to render proper accounts of how her ministry reportedly claimed to have blown away billions of public fund to feed school achildren during the three months of covid-19 lockdown when clearly the school children we’re all at homes in different parts of the country.

HURIWA wants to show Nigerians that the ministry of humanitarian affairs may have fed ghosts and claimed to have fed real Children,” the statement had claimed.

But Farouq debunked the allegations, claiming that they were mere fabrications and fake news targetted against the current administration’s effort to help the vulnerable.

In recent days, there have been speculations around one of our key intervention during the COVID-19 lockdown, and that is the National Home Grown School Feeding Programme which was modified and implemented in three states following a March 29th presidential directive whereby we were directed to continue to provide meal to primary school pupils (pri 1-3) across the country.

Kindly disregard the rumors of millions and billions peddled by rumor mongers,” she said during the Covid-19 Presidential Taskforce press briefing on Monday.

According to the minister, the school feeding programme has been implemented in just three states, Lagos, Ogun states and the Federal Capital Territory (FCT), so far.

She added that the concept adopted for feeding the children during the lockdown was the “take home ration”, which according to her, was agreed upon by the Nigeria Governors Forum (NGF).

Take home ration for school feeding programme was done in consultation with the state government through the Nigeria Governors Forum (NGF).

It was not invented by the Ministry,” she stressed.

She explained that stakeholders resolved that the programme should start in those three states as “pilot cases”.

For a state to take part in this programme, it must indicate interest in benefitting from the programme through the signing of an MOU which details responsibilities of the state and federal government,” she added.

She noted that the Federal Government provides the funding while states will implement; ” this is what has been obtainable abinitio , since this programme started in 2016.”

As we speak, only three states have launched the programme and they remain Lagos, Ogun and FCT.

She stressed that “each take home ration was valued at 4,200 naira for 3 children, based on statistics from the Central Bank of Nigeria (CBN) and National Bureau for Statistics.”

The minister further said that the programme in those three states were monitored by anti-graft agencies, DSS and NGOs and was done in partnership with the World Food Programme.

Furthermore, she claimed that government had done its best in the disbursement of palliatives through the states, to the vulnerable.

Every state government has received its own share of the palliatives for onward distribution to the poor and vulnerable in their society.

There was nowhere I said every Nigerian has received palliatives… this is very unrealistic because it’s just impossible,” she said. 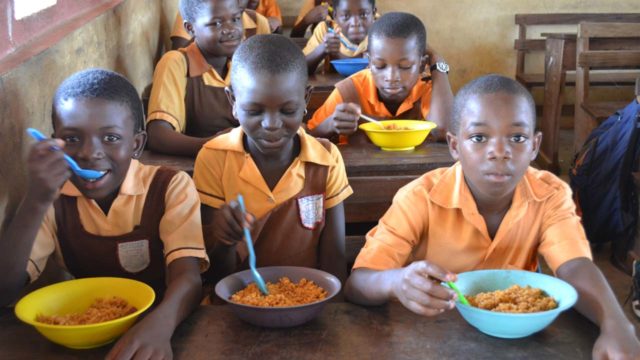 The Minister Of Humanitarian Affairs, Disaster Management and Social Development, Sadiya Umar Farouq has said N523,273,800 was expended on school feeding programme during the COVID-19…